Time for a switch? 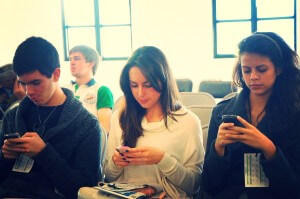 It could be just a new phase in the “it’s trendy to be different” craze, or it could be an idea rooted in wanting to reconnect us in a non-digital way. Who knows, but people are swapping in their smartphones for “dumbphones”.

The Age recently told the stories of a few switchers, listing some pretty convincing motivations for young people to move away from dependence on smartphones.

Strength: They are also much more durable, able to sustain falls on hard surfaces without the stress of a glass screen that can shatter into tiny pieces. Not to mention avoiding that moment of sheer gut-wrenching fear when you pick up a smartphone after dropping it and turn it around to reveal whether or not you’ve cracked it.

Cost: The cost difference is pretty drastic, with a Nokia 106 black costing $34 and the cheapest iPhone 6 setting you back $999. Also, the excess data charges that somehow always seem to creep up on you wouldn’t be a problem with a basic device. You only need to pay for calls and texts with a basic phone.

Security: Since you wouldn’t be going on the internet, or accessing any clouds, you’re less vulnerable to data security threats.

Camera: There’s no front-facing camera, so if you insist on taking selfies, they’ll be risky. Also probably pretty bad quality photos too.

Internet access: This is limited, depending on your choice of basic device, but perhaps waiting until you’re at a computer to look at new memes won’t kill you. Also without the distraction of internet browsing on your smartphone, you might actually notice what’s going on around you.

These are just a few obvious points, what about the psychology of being free from smartphone dependence?

Nomophobia is the condition which describes the anxiety felt by people without mobile phones, or just when they’re beyond mobile phone contact. It’s also something that a huge portion of the population admit to having experienced. Recently, Psychology Today released the effects of Nomophobia in the US. Apparently, a full 66 percent of all adults suffer from it. More than half never switch off their phone. Thirty-four percent even admitted to answering their phone during intimacy with their partner. Maybe if you only had a basic device, you wouldn’t feel so stressed when it runs out of battery on you, since you probably wouldn’t be that attached to it (it wouldn’t hold your everything.)

Even though the switching movement holds some convincing points, we still love our smartphones, and which ever way you go, text messages work on both. Would you consider trading in your smartphone for something more basic? Leave us a comment below!