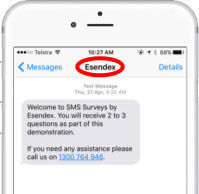 We recently undertook a study to understand the power of SMS sender IDs. We wanted to see if we would see a difference in responses if we used one against not using one.

An SMS Sender ID is the name of which an SMS message appears to be from, with many companies using their company name as the Sender ID. It was a way to brand text messages.

We pulled out the mobile numbers of some of our active customers—those which had sent or received an SMS within the last 4 months. We split the data into two groups and sent one group a single message from a Virtual Mobile Number (VMN – a number just like a normal mobile phone, except all replies that are received go to our online platform). In the single message we stated who the message was from and also asked the first question. The other group received two messages; the first used an SMS Sender ID, showing who we were. The second SMS, which followed shortly after, asked the same question as the single message group. The second message, however, they could reply to. 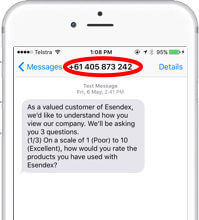 In all honesty we expected the single message to slightly out-perform the split message, simply because it has a path of least resistance; it’s easier to read and reply.

We assumed that the Branded SMS message would not perform as well because it required the recipient to receive the intro message, read it, wait a few seconds for the next message. They’d then have to open up the other message, read that and then reply.

The results were backed up when the marketing team in the UK carried out a similar experiment and their results were largely the same.

We believe this difference is due to a trust factor. A message using a Sender ID confirms that this is in fact the brand and they are asking the questions. We saw a huge increase in response between the two. When customer facing, therefore, it can be worth your while using a Sender ID to obtain your customers’ trust and increase sales or responses.

If you need responses or require an opt-out for marketing message, you can either do as we did and send the message that requires a response using another message, or you can insert a virtual mobile number people can reply to within the message.

If you’re not currently using a Sender ID, why not try experimenting with one yourself, and see how the results stack up?