Facebook Messenger has been available for business use since April 2016, and in an online survey conducted by Esendex in November 2016, Australian respondents were well ahead of European countries in their ambitions for utilising the platform.

As the chart shows, 31% of Australian businesses were intending to use Facebook Messenger, ahead of 18% in the UK, and just 7.4% in Germany, Austria and Switzerland (DACH). 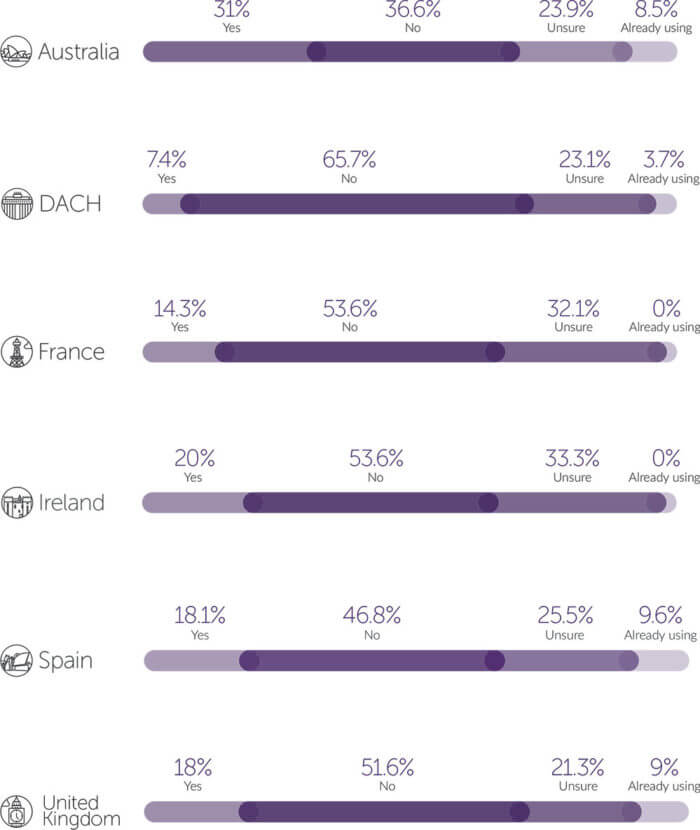 However, that’s still a majority of businesses who were either unsure or convinced that Facebook Messenger as a platform for sending business messages was not for them. The main reasons given were:

It’s interesting to compare this with responses to a earlier online survey, conducted in August 2016. This asked the question: How would you feel about companies connecting with you via Facebook Messenger? 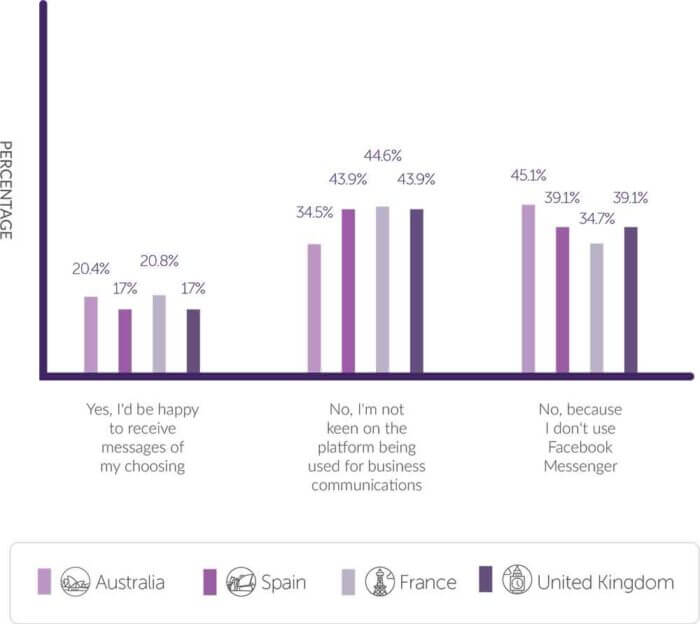 Similarly, these respondents were visitors to the Esendex website, so generally professionals seeking a mobile business communications service provider, or, like you, exploring our blog.

The fairly negative reaction is likely linked to the time at which the survey ran – only 4 months after the release of the platform. It takes time for attitudes to change, particularly when the prospect is adding a commercial element to a previously personal communication channel.

It’s also fair to say that Facebook hasn’t done the best job of communicating the value of Facebook Messenger as a business communications channel.

The proposition revolves around the use of bots, which take the place of a person in a two-way chat. They use AI to determine the intention of your question, and supply responses accordingly, which could be anything from suggestions for a wedding outfit to the departure time of your flight.

Bots get an awful lot of airtime in tech newsletters, but in practise, are still largely the preserve of big brands and developers exploring a new skill set.

Additionally, Facebook Messenger keeps evolving at breakneck speed; there were no fewer than 7 major new feature deployments in the 15 months after release, which means determining how your business might utilise the platform is something of a moving target.

This will depend on your customer base. There are 1.2 billion monthly active users of Facebook Messenger worldwide (source), and broadly speaking, these fall into the groups you might expect: 73% of 18-29 year olds, 66% of 30-59 year olds, and 43% of the 60+ age group were reported as being users during a February 2017 survey of U.S. smartphone users (source).

If your customer demographics seem like a good match, the next step is to work out what the platform can do. While bots have a major part to play in this, Messenger also supports subscription messaging, promotional messaging and payments, and can be embedded on your website as a form of live chat.

We’ve explored the challenges, the possibilities and several use cases in our latest free eBook, Don’t shoot the Facebook Messenger.

I'm Head of Marketing at Esendex, with a background in software and a passion for digitial marketing. I write about the transformative power of technology, and always value feedback!